I was going to just comment on your FB page, but I have been blocked from adding a comment. NO OPPOSITION, huh??? Remember, you work for the people of Dist. 11, not just your supporters, at least until 2010.

I am sure you have heard about ACORNs recent troubles. I also know that you are not foolish enough to believe that FOX News put words in those innocent workers mouths. That is some kind of editing job!

We have seen the video of Pres. Obama speaking to the members of the SEIU, we know that he consults with them about "everything" almost.

http://seiuorg.capwiz.com/bio/id/36912 This web site tells us how you voted on the SEIU issues.

Madam, speak out against these corrupt entities or we will know that you are just one of them. I may not be able to comment on your FB page, but I have other avenues of shining a light on who you really are & whom you are in bed with. As I mentioned before, you may want to start preparing your resume, the PEOPLE are not happy with you, or your other House members.
Posted by Karrel at 9/14/2009 05:41:00 PM No comments: Okie dokie - so I have a lot of cool contacts on Flickr, but I just love doncon402. Please check out his work if you love landscapes. He travels all over & is from FL. This picture is taken at my old home - Monterey CA. Isn't it neat the way he added those rays!

Please stop by his site & leave a nice comment.

Last night, rather than doing anything on my list I worked on this little pix: 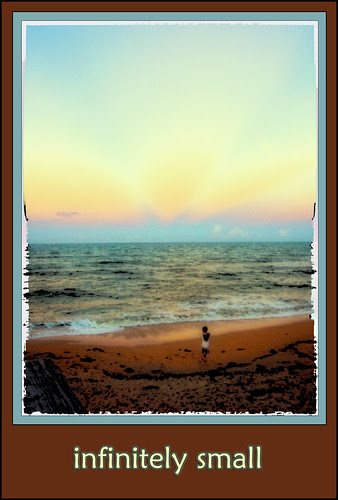 I think it came out pretty cool. This weekend I am going to take the Nikon D60 out and I am going to get some pix. There is this scene I see everyday when I leave work, the glass buildings downtown, the clouds and the distortion. I just really love it. So, Sat. afternoon I will come and shoot that (hold me to it - ok). And then I have already thought about going to the top of several parking garages and taking some pictures. Let me tell you - when I am on the Selmon Crosstown (Tampa) I always see the most remarkable sunsets, etc. But once I get off, I have lost that height & perspective. So I am thinking of going to the Hyde Park Garage & then the garage at my old office building and shooting sunsets.

I missed the beautiful full moon last week. There was on shot I wished I had my camera & a tripod for - the moon was shining between two houses and there was a palm tree to its left. I know it will be there again next month & I will go and shoot it if I remember. (This was at my son's house.) But I read that this months full moon was the largest it has ever been.

Oh, Oh, Oh, Mr. Cotter!!!! (Sorry - I digress, but I got excited for a moment.) I am going back to Hammock Beach for New Years Eve and I am bringing the whole set up. Guess I need to tell Jeff I bought the camera before then... Anyway, this time our suite is on the beach itself and I plan to get some really nice shots.

OK, better get to work. Keep your fingers that all vomiting and runny poop is gone from my house. When you have 5 dogs with the flu - holy cow - what a mess. We have gone through lots and lots of newspapers & paper towels this past week. 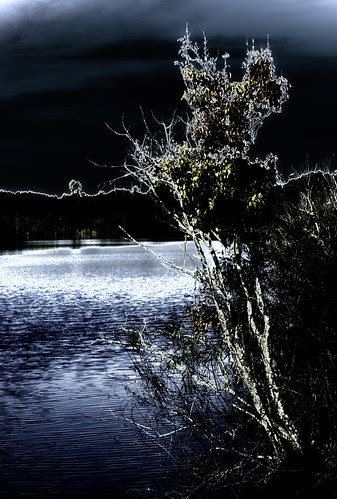 Well, I made a list (see previous post) and forgot to send it to my house. But I did do something on it - I cleaned the area for the tree. Now - I just have to find the tree.

When I am old, if I am not already living in an RV, I am going to live in a single wide trailer and I am not going to have a lot of junk. Right now I am overwhelmed with junk. How about the rest of you? I think about getting organized, but crap, that takes up too much of my time to do the stuff I want to do. Really though, it wouldn't be too hard.

In my scrapbook room all that really needs to be cleared of is the tops of the two 8' work benches. Do you hate table tops? I sure do. Because try hard as I might, they end up getting cluttered. So, these two areas are cluttered. They have stuff on them that is trash (though not really that much). Mostly it is stuff that was taken off of its shelf & never replaced. A lot of this is scrapbook stuff (on one bench) and quilting stuff (on the other). So my thought is - 1st to get some bins and just put everything in the bin. Then I can sit on the couch and go through each of them and sort.

Let me tell you about bins & my husband. Also, bins and me. Start with me. I moved from California where I had a ton of stuff to move. Lots of it was in boxes. In Georgia when it was time to move, most of the stuff wasn't unpacked and lived in the basement and the attic. When it came time to pack up, I didn't have room for the stuff in the basement. Mind you, it is stuff I hadn't looked at in years. Yet every now and then I think of something and mourn its loss in that basement and attic (like my mom's glass blown Christmas ornaments she collected when we lived in Germany or some of my own personal momentos).

When I moved from my mom's house (where I lived after she died) to another house, 10 years later, and 5000 miles away, I remembered that there was a ton of stuff in the attic, in old Army trunks. My mother hid money, maybe money was up there. Also, she wrote her family history. At the time I didn't care and it was tossed out. What I wouldn't give for that now.

OK, back to bins. So then I move to Florida and I am constantly downsizing. But there are boxes of things that I just can't throw out. You know the rule, if you haven't looked at it in a year toss it. So sometimes I did that. When I moved into my own apartment, after my kids got on their own, I left behind stuff. Even now, 15 years later, I think of stuff I need or want that is long gone.

Enter my husband, he is a yardsaler and flea marketer. He buys good deals, hoards them till he has enough & then goes out and sells everything. He is also a carpenter and never met a nail or screw he could part with. So every few months I clean off counter tops and get a bin full of his crap. We have baskets and boxes full of old nails and screws and screw drivers, etc. All things that he just keeps replenishing, rather than dig through a bin. 14 years of this crap. He's a good man, but he isn't neat.

Once I had a dream, of having just enough stuff to fit in my car and being able to pick up and go wherever the wind blew me. And I started ditching my stuff, but now I have soooo much stuff I am being dragged down.

So, I am making this resolution now - prior to New Years - I will reduce my clutter. And once reduced I will not add to it. You hear my vow, keep track of my progress. I will soon post a tracking station so you can see how I do. By this time next year I will be one organized mama and then my Shui or whatever will be in line. Feng to you, my friends, Feng. 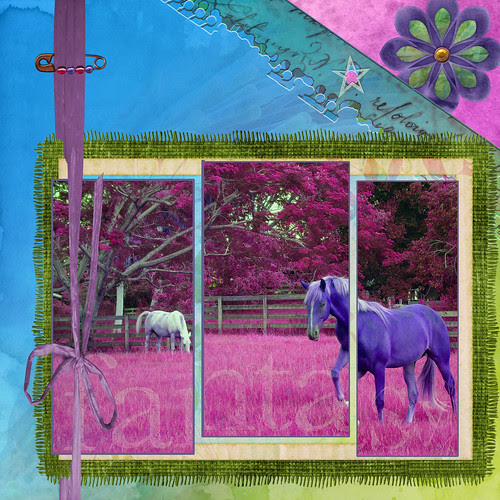 So I have been so busy doing everything that I haven't had any time to blog. I have been digital scrapbooking - check out my Flickr site for those. And landscaping a mini-quilt. I finished the large one (pix on Flickr - of course), but I want to get a professional shot of it. Will arrange that this weekend.

This shot is a fun one. I was going to do a mini landscape of the horses and then I started adjusting it and came up with a blue horse. A few more clicks and I had a purple one. I love it. Can't wait to do the landscape of it. May do it in 3 pieces liked the sliced photo here. 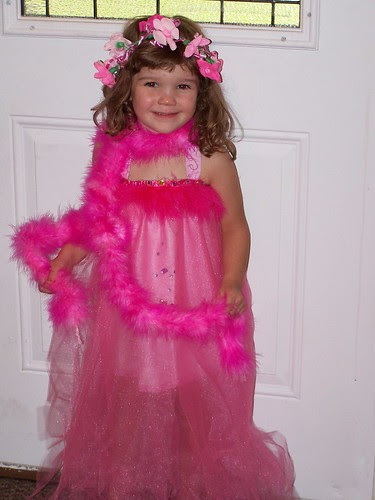 This is our little Hopey wearing a princess dress I made for her - isn't she so cute!

Long time since I hooked up with you

A bunch has happened since I last blogged. Starting with the worse, my daughter-in-law's mother broke her hip in an accident last Tuesday, had her hip replaced on Friday and passed away from a blood clot on Sunday morning. All so quick and so sad.

I spend Sat. night with 2 of my grandchildren, Kaitlyn & Bryson, and that was nice (the children of my son & daughter-in-law).

The weekend before Kaitlyn was in the hospital. She is on chemo and needed a transfusion. She seems much better now, but her blood counts are still low.

The weekend before that we were in Port Huron MI for my m-in-l's 75th birthday. We had a great time. It has been 10 years since we were up there last. Got to see our grandchildren up there.

Quilting - I have been doing a lot of quilting and embroidering. Trying to finish up kits I bought and get that stuff done. I also bought a Janome MC11000 and got a free Janome serger. I have lost of pix on my Flickr site and will be adding more. To see click HERE - http://flickr.com/photos/karrelbuck/
Posted by Karrel at 8/13/2007 11:40:00 AM No comments:

Also bought a Janome 6600P - love it - below - to be quilted this weekend & embelished. quiltsmart.com pattern 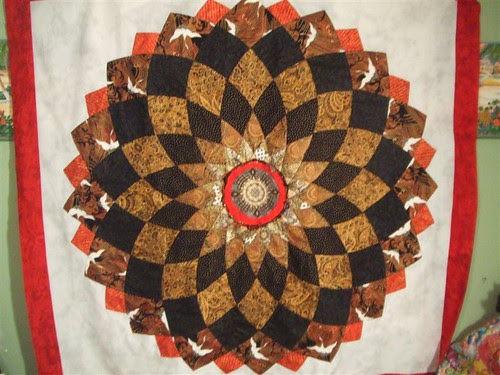 Hey - what ya workin' on

Wondering what I am up too?

Scrapbooking sites that are COOL